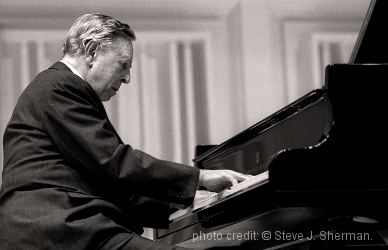 Heir to the greatest Czech musical tradition stemming from Dvořák and Smetana, a direct pupil of Leoš Janáček, Vilém Kurz and Josef Suk, and a friend of Bohuslav Martinů, over the course of his seven decade long career, this renowned Czech pianist appeared in the world’s major concert halls, and with most prestigious orchestras and conductors, from Koussevitzky, Walter, Klemperer, Szell, Talich, Beecham, Boult, Mitropoulos, Leinsdorf and Wallenstein to Bernstein, Maazel, Giulini, Muti, Mehta, Bělohlávek, Neumann, Pešek and Abbado. His chamber music partners included legends like Milstein, Piatigorsky and Fournier. His recordings have been listed in catalogues of virtually all notable recording companies, including Deutsche Grammophon, Philips, RCA Victor, Decca, VOX, Supraphon and Sony.

Firkušný was able to achieve all this not only due to his exceptional talent (he began to study with Janáček at the age of five and at the mere age of ten played as soloist with the Czech Philharmonic Orchestra) and excellent education, but above all through diligent work and constant self-improvement. Instead of relying on proven virtuoso showpieces, he was able to attain fame with a repertoire based largely on Czech music and serious classical works. At the same time he was also a supreme interpreter of new works by contemporary authors, not only Czechs like Martinů and Kaprálová, but also North and South American composers like Barber, Menotti, Ginastera and others.

Apart from his hard and honest work, Firkušný’s personal qualities also helped to establish him as a world-class pianist. He is remembered by many as the epitome of a perfect gentleman – perfect in his appearance, equally endowed with wisdom as with good manners and conversational skills (he was fluent in six languages).

He was able to retain the boyish charm of a handsome, albeit somewhat introverted and reserved, almost bashful youngster well into his later years. His students recall his ardent idealism and personal warmth – within the strict walls of The Juilliard School, known for its atmosphere of fierce competitiveness, his arrival from his nearby apartment (just steps away from Lincoln Center Plaza, home to both the New York Philharmonic at Avery Fisher Hall, and to the Metropolitan Opera House), would seem a visitation from another world. Always in a pleasant mood, he was able through just a few words and direct examples not only to help, but also to support a student's own creativity.

He was also a totally unique performer – from the romantic school of playing he retained a sense of cantabile; an expressive tone and ever-present rubato; the courage to speed up in passionate phrases; and the conviction that content should always take precedence over represented form. Yet at the same time he was almost surprisingly modern, with a remarkably responsible analytical approach to the musical text. He would naturally combine individual parts with an intuitive attention to detail, climaxes and sub-climaxes, building in intensity but subordinated to the general outline of the work, allowing for clear references to other elements of the piece. He himself had studied composition, and were it not for his proverbial self-criticism and extensive workload, we might have been left with a rich heritage from him in this area, as well.

It is impossible not to mention his exemplary patriotism. Firkušný was very close to the ideas of recently deceased president Havel. In one of his last interviews from the USA he expressed that he shared Havel's disappointment regarding the split of Czechoslovakia. He obviously always kept believing that the new democratic country would be able to follow the tradition, in which he himself was raised – the Masaryk „first republic“. The firm attitude with which he consistently refused to return to a country oppressed by a totalitarian regime meant that from 1948 till November 1989 his name was blacklisted and his excellent overseas recordings unavailable to anybody but a handful of secret admirers. He who had been the recipient of a scholarship from President Masaryk and was a personal friend of Jan Masaryk (like others close to J.M., he always believed it must have been a murder), as well as of other persecuted individuals, could not reconcile himself to that state of affairs. Instead, he dedicated himself to preserving the part of Czech culture that he considered to be of eternal and incontestable value – its musical heritage. The works of Janáček, his own teacher, of Martinů, his close friend, of Dvořák, Smetana and others, were a given at his concerts, and he was able to promote their compositions (in spite of their apparent non-commerciality) in catalogues of the most important recording companies.

His centennial anniversary is therefore an important event, rightly celebrated by the Academy, which made Firkušný the recipient of its first ever honorary doctorate, and which proudly bears the name of his teacher, Leoš Janáček.